Download this week’s game with the simple one-click download below! Once downloaded, unzip, play the executable, enjoy!

What’s new
Different main mesh: a Christmas cactus for my friend Felicia! Bring on the happy! 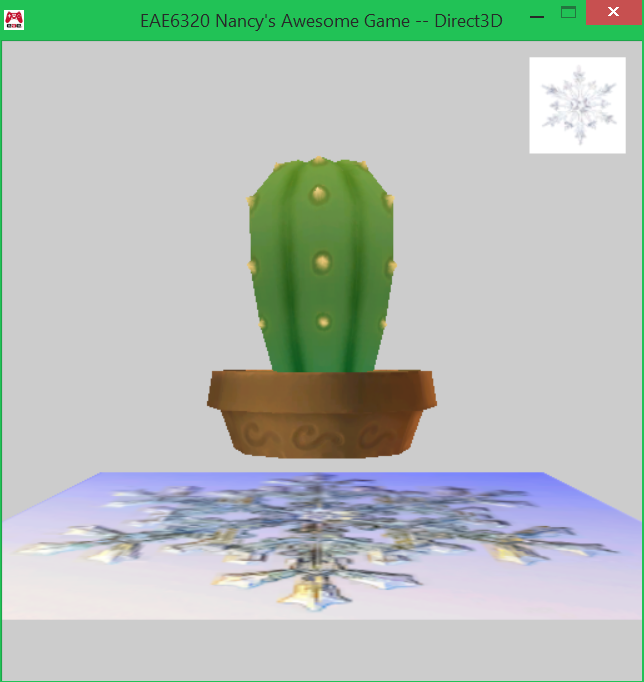 The advantage of the human readable file is that you can read, understand, and debug that file just by reading it, but they do take longer to load and are bigger files. So the idea is to load/store the assets in binary for two reasons: 1) It is more efficient (faster) to load from binary, and 2) it is also more economic (they are smaller) to store the files. So in our regular build and source files, human-readable: since a human needs to be able to interpret and debug them, but in our run-tim binary: because we’ve done all our testing and debugging and now only the computer needs to be able to read them.

There are four pieces of data that each mesh needs: number of indices, the indicies, the vertices, and the number of verticies. I chose to do the number of indicies first (since the binary read in needs to know how many indicies there are so it can jump to the next right place in the data), then the indicies next since they take up less space and are easier to read in a binary format as they are integers. Next I chose to do number of verticies, again because the read in needs to know how many vertices there are so we know the size of the memory, and then the verticies themselves. I could have done number indicies, number verticies, indicies, and then verticies, or a number of different configurations, but regardless of the order I chose, the number of indicies and verticies would always need to be stored before the index and vertex data.

Here is my floor’s binary file with the above listed order:

Lastly, enough talk! Let’s show the two advantages of the binary files: I made an object with 50436 index count, and 33616 vertex count. Here’s how they compare:

Thanks to Zeno who once again helped me with some of the C++ basics I’ve forgotten. It’s been a long time since I did file i/o with c++, and he was very helpful.

Two new podcasts to help you be "the you" who you want to be! Link in my bio.
Drop a 👍 if you're sick of new year’s resolutions that fail you!
Wellness is about progress, not perfection, but even progress can sometimes look like failure. Give yourself the grace you need to grow. It's okay to have what feels like backslides. Those become speedbumps as long as you keep going!
This one is for all the pregnant ladies! DATES (The fruit, not the night out) can decrease the length of labor and post-delivery bleeding. WHAT?!?!
I've never been a fan a spring, but I am loving this one. My honey got me this beautiful rose bush and something about this right now just feels hopeful. Full of bright, wonderful blossoms now and more to come.
New wellness podcast! This simple, sweet diet addition will make a big difference in labor and delivery!
I'm thankful for my husband, kiddos, dogo, comfy blankets, interesting work, good and kind students, roses, and pumpkin rolls!
If Mother’s Day is tough for you I hope you will take responsibility for your own happiness and find a way to celebrate it. It doesn’t have to be a joyous occasion, this life isn’t always about being over the top happy, but this day can be a special one.
If you're looking for friends, then aiming for popularity may not be the right goal. Did you know that most people feel the "cool kids" aren't exactly friendly! Don't worry about being well-liked by everyone, just make friends with amiable people, like yourself.