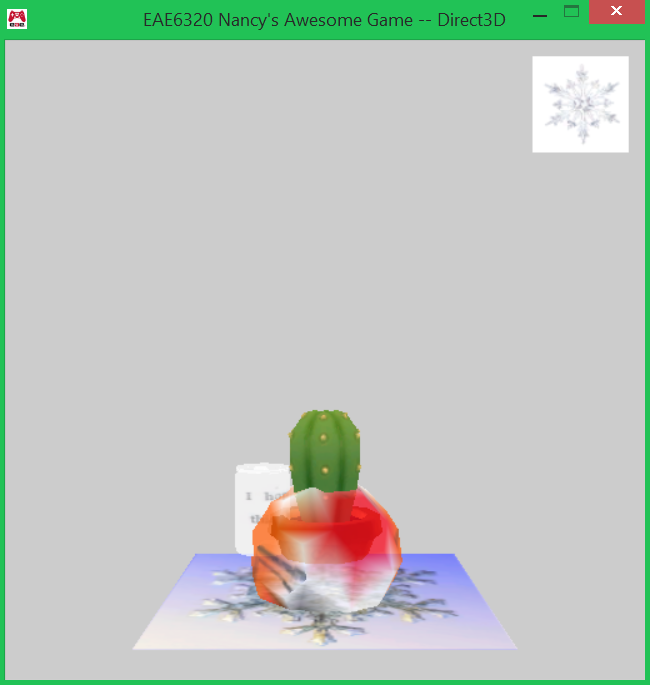 This time around I added the ability to become transparent to my meshes! It was fun. 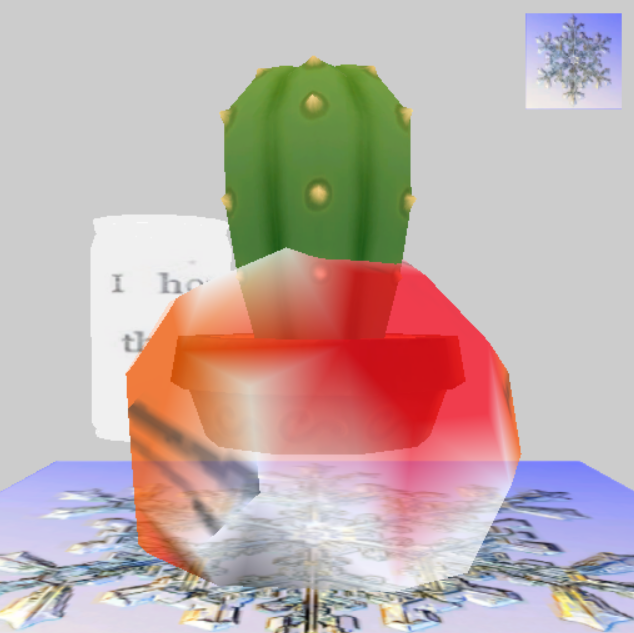 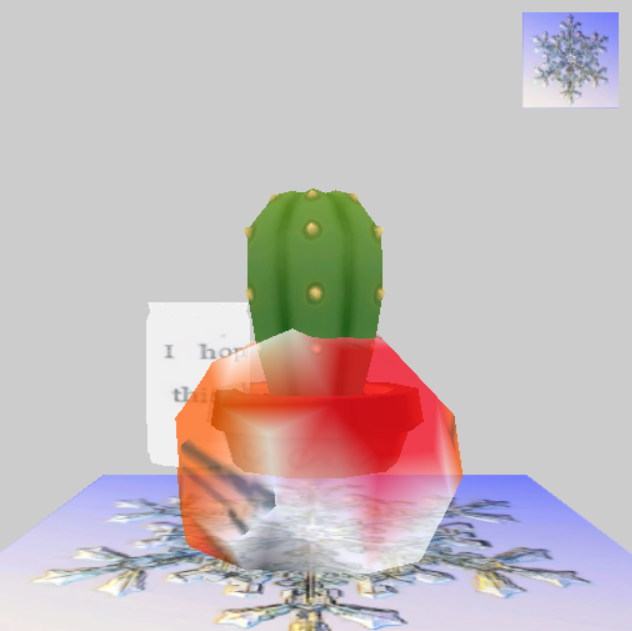 So what I did to order the draw calls is: after submission to the render thread is over and and before the swap, I ordered the draw calls. How? First thing: I added the index of all opaque objects (I just asked the mesh’s effect if it was opaque, nicely of course) to a vector in the order they were submitted, and then put the transparent meshes in a separate vector with their index and their camera space z value. This is the key to quickly sorting these meshes: in camera space I immediately know which meshes are in the back and in the front based solely on their z values since camera space is when the camera is at the origin and is facing forward. Then a simple std::sort with a lambda function that orders the z’s based on z forward being negative z (i.e. larger values of z aren’t closer to the camera, they are the farthest away), quickly sorts those values. Once sorted I added the index values of the sorted transparent meshes to the end of the previously mentioned vector (the one with the opaque meshes all in front to be drawn first.) Then in the rendering of the meshes I draw them in the order of the sorted draw calls.

I chose the render thread because with my game it doesn’t really matter which thread does the sorting because it’s such a small game. However, in a real game I would profile both threads and then choose the thread that takes the least amount of time.

I asked my brother how to use the std::sort with my vector<struct> as I hadn’t done a templated sort before . He set me on the path with the google search I needed and I whipped out a lambda compare for my sort in no time.  Thanks bro!

Now we’re getting somewhere! The game can now render an arbitrary amount of sprites per frame. In this instance there are four. I think it’s pretty. 😉 (Simple one-click download. Once downloaded, unzip, play the executable, enjoy!)

The simplest part of this project was letting the game submit to the graphics a different background color. This data is cached until the renderer is ready to render. 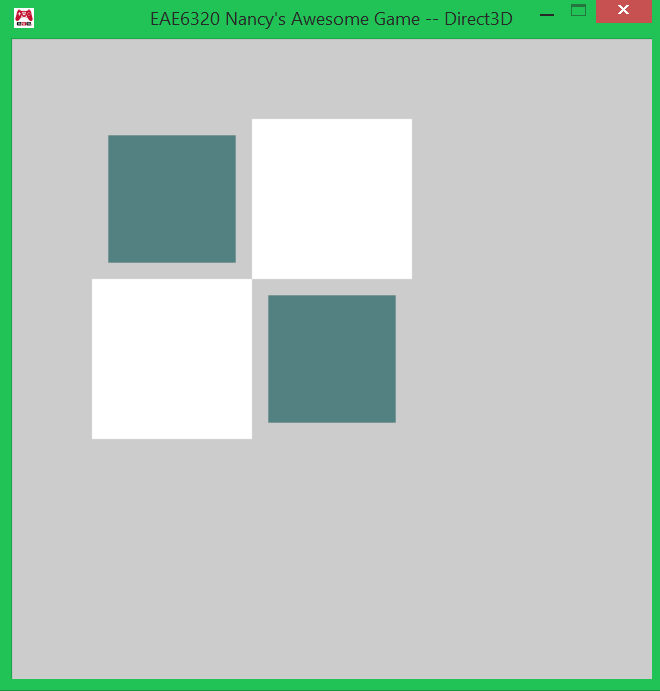 I moved all the sprites and effects out of the graphics class and created them in the game. Because rendering takes a significant portion of time in games, we utilize threads to render while the game computes data. In this implementation the game submits to the render data it wants rendered, which is then cached by the renderer until it’s ready to render. When the game is done submitting it lets the render thread know. When the renderer has finished rendering all the previously submitted data it cleans up that data and let’s the game know when it can start submitting again. This is the point where the threads sync, which is done each frame. At sync the render thread swaps the submitted cache and the cache it just cleaned. It then uses this data to render, and the game has a clean cache to submit data too. Submitting to the render thread is simple, just send over the sprite with its corresponding effect:

Each rectangle needs it’s own sprite, but an effect can be used multiple times. So the second sprite uses the same effect:

Even though we are passing reference pointers around for all the sprites and effects, since we can send an arbitrary amount of sprites and effects to render the memory overhead can get large if we haven’t optimized their size. I had previously optimized the sprite and effect size by ordering member variables from largest to smallest. However when I saw the sEffect size I realized I was passing around unnecessary data. I removed it and the size dropped by the size of the variables I removed.

I’d only ever looked at the size of objects via code, so it was interesting to me to look at it during compile time. I opened the Debug->Windows->Immediates window in Visual Studio, put in an obvious breakpoint and when the debugger paused, I typed in “sizeof(ObjectName)” and the immediates window printed it out. Thanks to Mark Smith for helping me find the Immediates window.

I am having a recurring Visual Studio run bug. I spent quite some time trying to resolve it. J.P. tried to help as well for a while with no luck. I finally reverted all our changes, closed VS, and rebuilt and the bug went away. The thing is that I’ve done this multiple times and it keeps coming back. Running and building in Visual Studio haunt me and give me terrible nightmares. 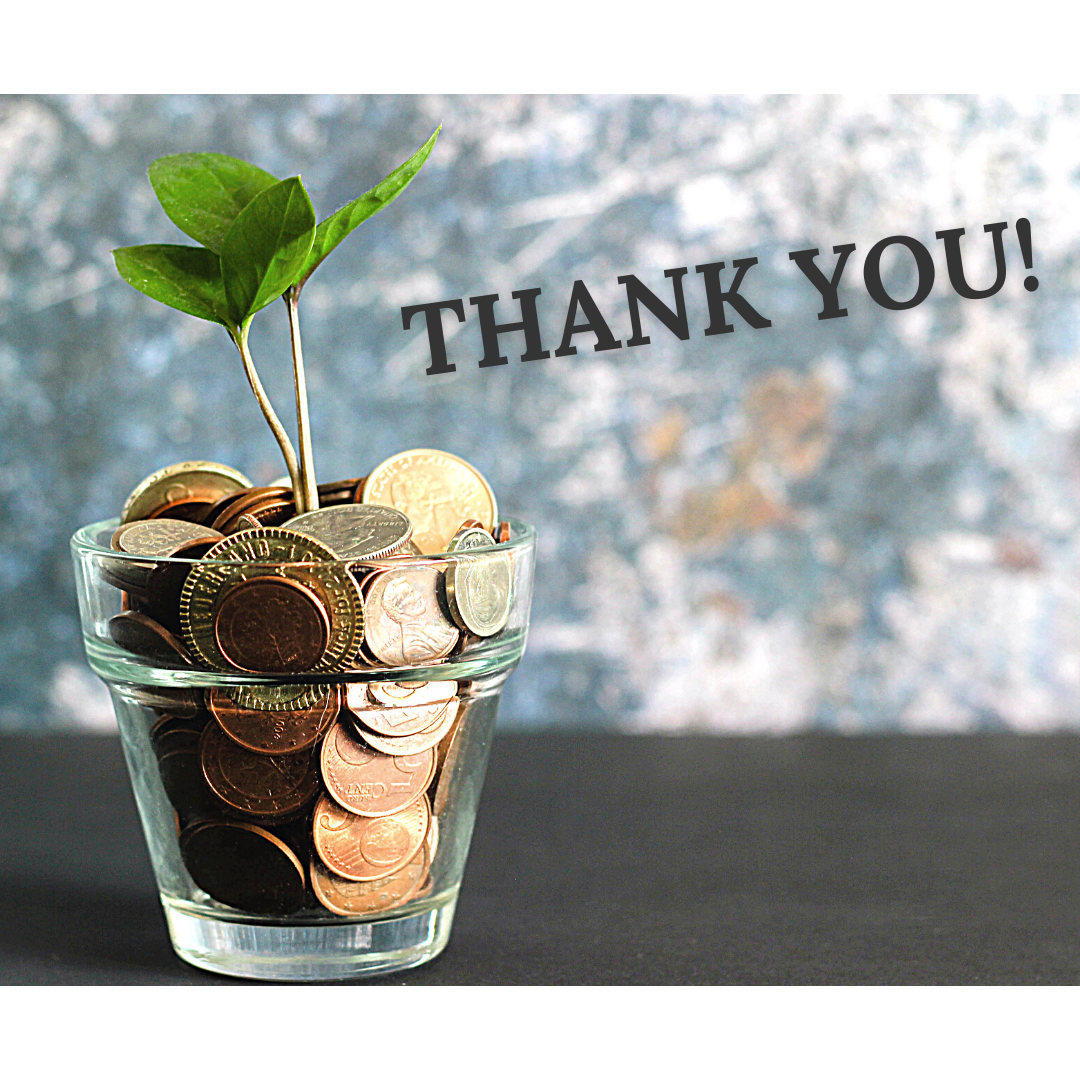 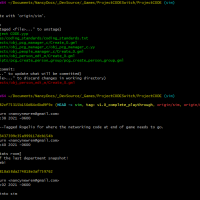 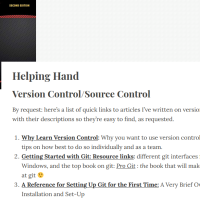 Wellness is about progress, not perfection, but even progress can sometimes look like failure. Give yourself the grace you need to grow. It's okay to have what feels like backslides. Those become speedbumps as long as you keep going!
This one is for all the pregnant ladies! DATES (The fruit, not the night out) can decrease the length of labor and post-delivery bleeding. WHAT?!?!
I've never been a fan a spring, but I am loving this one. My honey got me this beautiful rose bush and something about this right now just feels hopeful. Full of bright, wonderful blossoms now and more to come.
New wellness podcast! This simple, sweet diet addition will make a big difference in labor and delivery!
I'm thankful for my husband, kiddos, dogo, comfy blankets, interesting work, good and kind students, roses, and pumpkin rolls!
If Mother’s Day is tough for you I hope you will take responsibility for your own happiness and find a way to celebrate it. It doesn’t have to be a joyous occasion, this life isn’t always about being over the top happy, but this day can be a special one.
If you're looking for friends, then aiming for popularity may not be the right goal. Did you know that most people feel the "cool kids" aren't exactly friendly! Don't worry about being well-liked by everyone, just make friends with amiable people, like yourself.
Certainly, when you see the size of the bottle essential oils come in, it may seem costly but this just a misconception. There are typically 80-250 servings per bottle (depending on the size of the bottle and the oil), making it just pennies per serving.
Interacting with humans can be messy! That doesn't mean it isn't meaningful.